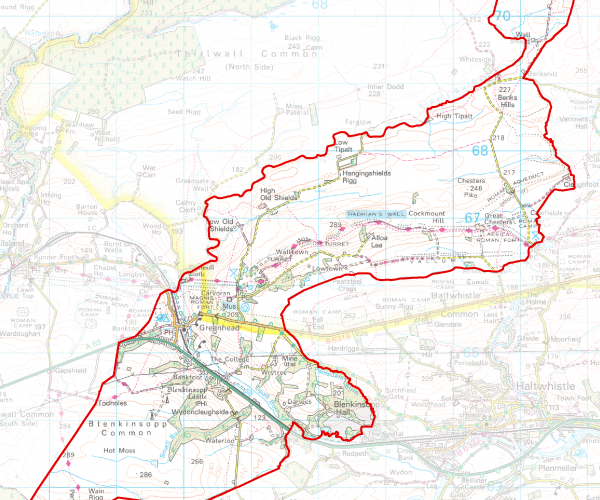 Greenhead is a small village in west Northumberland. Since 1892 it has been an ecclesiastical parish. Its name is said to refer to its location between Tipalt Burn and the River Irthing. The church erected in 1828, was designed by the well known Newcastle architect John Dobson when Greenhead was a chapelry of the parish of Haltwhistle. The surrounding settlements of Thirlwall and Blenkinsopp each have castles built during the medieval period when the area was subject to much border raiding. Thirlwall castle is ruined but Blenkinsopp was restored in 1880. In more recent centuries, the railway came to Greenhead in the 1830s with the building of the Newcastle to Carlisle railway. This replaced a scheme to build a canal between the two towns. In 1801 the combined population of Blenkinsopp and Thirlwall townships was 518 and by 1851 this had risen to 1221. This was probably due to increase in coal mining in the area. It is believed that the local coal mine was named Byron in honour of one of the local landowners in the 19th century, Mrs Coulson who was a daughter of Lord Byron. A row of houses called Byron Terrace still exists near Blenkinsopp Colliery.

The Parish Council, as the most local form of government, is closest to the electorate in that all councillors must live within or very close to the parish boundary. It meets six times a year and its meetings are normally open to the public. The council is responsible for functions like cutting grass around the war memorial, maintaining the bus shelter and public benches, commenting on planning applications that affect people in the parish and contributing to local events or organisations.

The rules and regulations for Parish Council Elections are included in the 1983 and 1985 Representation of the People Acts together with the Local Elections (Parishes and Communities) Rules 1986. The Electoral Administration Act 2006 includes details of how voting is carried out at the polling station and postal and proxy voting. These rules also explain the electoral timetable, combined elections, poll cards and co-option of members.

There are currently no events to display